skip to main | skip to sidebar

So thanks to Nanny reruns on Nick at Nite and the magic of DVR, I'm able to watch even more episodes of the Nanny. (Maybe not a good thing?) I'm pretty familiar with seasons 1-3 since I own them on DVD (obviously) but am getting more familiar with the later seasons. Basically I DVR anything from 1996 on up. So amazing things I've discovered recently.
1. Did you know that Ray Charles played Yetta's fiance, Sammy?
2. Did you know that Sammy's nephew was Bryant Gumbel?
3. Roseanne played Fran's cousin Sheila?
4. There was an episode where Fran was the 5th wheel, both Cece and Val had boyfriends and she dances to my second favorite Eurythmics song, "Would I Lie To You?" (No. 1 favorite is "Love Is A Stranger". If you haven't seen the video, I can't recommend it enough. I met someone who told me that the first fashion show she went to was Karl Lagerfeld when she was 16 (?) in Paris and they played this song. I have no words.)
5. FRAN FINE'S BIRTHDAY IS NOVEMBER 26th. Ummm...MY birthday is November 25th. Crazy coincidence???? This blog was fated to happen???? Maybe I'm overreacting?
Last thing, I saw an episode where Fran wore one of her short hair wig looks with a white headband (pre-Blair Waldorf), white turtleneck, white patent boots and a lime green patent Courreges skirt suit. This exact jacket but in lime green. 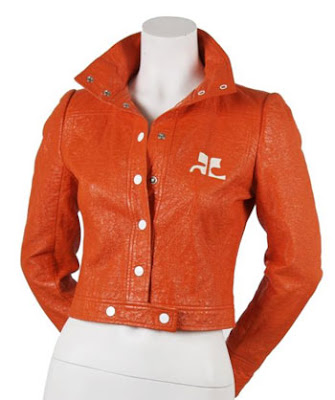 If you ever just want to talk about a good Nanny episode, I'm always up for it.
shouldbeonthenanny@gmail.com

My tumblr for non-Nanny topics:
I Will Tumble For You